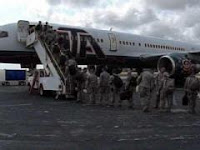 from wesh: Members of the 1st Battalion 265 Air Defense Artillery have mobilized and are on a plane headed first to Ft. Bliss, then for federal active duty in the capital region.

The troops will be deployed for a year.

"It's going to be all right It's OK if he helps people and everything, and it's his job. He’s got to do it. He just got to do it," Jessica Ward said, whose father is being deployed.

Jessica speaks for many when she talks about her father's deployment.

Michael Ward and company are leaving for a year, and that weighs heavy on families.

The 265th is part of Operation Noble Eagle.

They are ordered by the president to the nation's capital, where they will operate high-tech weapons systems against any potential air threat.

Yolanda McCormack is relieved husband Charles isn't headed to Iraq, but there is always a risk.

"Doesn't mean he won't be in the line of fire in Washington, D.C., but it does give me a little comfort," Yolanda McCormack said, whose husband is being deployed.

Families may get one or two opportunities to see loved ones during this year-long deployment, but it’s not encouraged. Though the solders are staying in the states, they are on serious business.

Staff Sgt. James Todd said duty at home is just as important as the mission overseas.