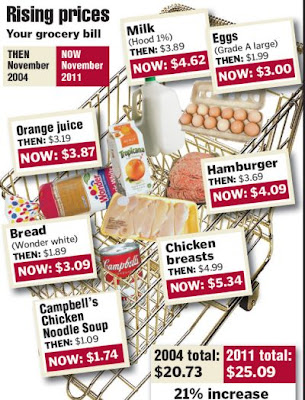 from boston herald: Shoppers are feeling the pinch of higher food prices at the supermarket, and most consumers are convinced they will be shelling out even more cash for groceries next year. “Prices keep going up,” said Vladimir Nefyodov, a home health aide who shops for his elderly clients at Shaw’s in the Fenway. “My clients are on a fixed income and they’re watching every penny, and they’re hurting. Banks got the government bailout but people are left to suffer.” Nefyodov is not alone. Nine out of 10 consumers say they are paying more for groceries now than they were a year ago, according to the latest Rasmussen Reports poll. In a survey of 1,000 American adults, 81 percent said they are at least “somewhat concerned” about inflation, including 47 percent who are “very concerned.”