Food Skyrockets to Highest Prices Ever 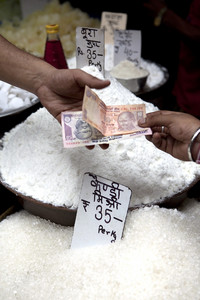 from natural news: Figures recently released by the Food and Agriculture Organization (FAO) index of 55 food commodities indicates that worldwide food prices hit a record high in December. Though the costs of some food commodities like rice, corn and soy actually decreased, oil seeds and sugar jumped significantly due to various factors including erratic weather and droughts, according to reports. In the past, such ups and downs on the commodity market did not immediately affect actual food costs for consumers, but some experts say that this is no longer the case, and that “food inflation” will occur right alongside the commodity price gains. And rapid food inflation has already taken place in India, for example, with recent reports indicating that the country experienced an overall food inflation rate of 18 percent in 2010.

One response to “Food Skyrockets to Highest Prices Ever”