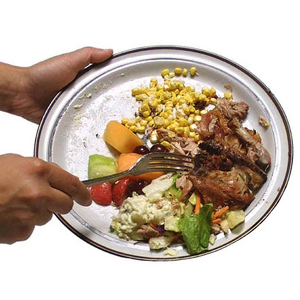 from rawstory.com: British households are throwing away 4.2 million tonnes of food and
drink a year, the equivalent of six meals every week, a study published
on Thursday said.

Some £12.5 billion worth of food and drink was discarded in 2012,
with the average British family wasting nearly £60 a month, according to
the study from the Waste and Resources Action Programme (Wrap).

Fresh fruit and vegetables make up the largest proportion of avoidable waste, with bread and milk also commonly discarded.

The equivalent of 24 million slices of bread were thrown out last year, the government-funded body said.

The study said that factors contributing to the waste included
unclear labelling and storage information, as well as consumers
overestimating portions and buying more than they needed.