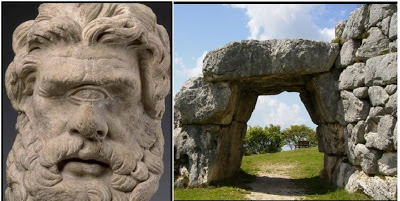 Giants are forbidden history.  Richard Cassaro fascinates with view on ancient race of Cyclopes (picture) in article, "Hidden Italy: The Forbidden Cyclopean Ruins (Of Giants From Atlantis?)." Cassaro suggests polygonal architecture such as Saracena Gate (picture), provides evidence of an early advanced race.  The architecture is widely known as Cyclopean, and in prior centuries, attributed to the work of giants. The author suggests:  "Cyclopean ruins in Italy, all of which demonstrate unsurpassed skill and accuracy, and many that appear to 'fit' giant humans in their proportions; combined with the legends of giants present in countless cultures, including in the Bible, one might begin to wonder if there is a gem of truth inside the tales and legends." The article contends, there's a prohibition in place on any examination of true source of these remarkable structures.  Authorities persist in relegating Cyclopean ruins to realm of myth.

"According to 19th century researchers, such as the Russian mystic H.P. Blavatsky, these myths of giants are not myths at all, but chronicles of a former race of giants on earth, survivors of Atlantis who escaped the great Flood," writes Cassaro.  There's a quote in article from Blavatsky's "The Secret Doctrine," pertinent to the one-eyed giants, "…the 'third eye' was once a physiological organ, and…later on, owing to the gradual disappearance of spirituality and increase of materiality (spiritual nature being extinguished by the physical), it became an atrophied organ.”  History suggests Cyclopes did exist, contends Cassaro.  A race in remote past with advanced skills becomes taboo, because it runs counter to Man's view of himself as pinnacle of evolution.  Cyclopes' skills surpassed that of human race, in some respects, concludes article:

"Italy’s Cyclopean walls threatens the scholarly 'From-Caveman-To-Space-Traveler' evolutionary view of history, which is the mainstream agenda being pushed by governments, universities, and the mass media. These megalithic monuments in Italy indicate that a powerfully-advanced civilization existed in the ancient past on the Italian peninsula (and Greek peninsula), a civilization that was perhaps light-years ahead of the later Etruscans and Romans, who were themselves far more advanced than modern scholars give them credit for."