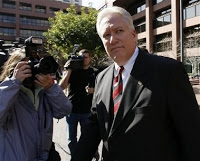 from ap: A new indictment of a former top CIA official alleges that he received bribes in the form of "sexual companionship" in exchange for helping a friend get an edge in landing multimillion-dollar contracts from the agency.

Federal prosecutors in Alexandria, Va., on Tuesday obtained a superseding indictment against Kyle "Dusty" Foggo, who as executive director held the CIA's No. 3 rank before leaving in 2006.

The indictment accuses Foggo of accepting tens of thousands of dollars in meals, vacations and other perks in exchange for helping friend Brent Wilkes obtain various contracts with the CIA.

The new indictment also includes an allegation that Foggo received sexual companionship and "enrichment of a mistress," though the allegations are not detailed in the indictment...

The sexual companionship allegation may be new to the formal charges against Foggo, but they are a familiar part of the case as a whole. Wilkes has already pleaded guilty to paying bribes to then-Rep. Randy "Duke" Cunningham, R-Calif., some of which came in the form of prostitutes.