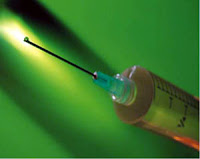 military source believes experimental shots may have been given

from msnbc: Target 5 has discovered that an alarming number of U.S. troops are having severe reactions to some of the vaccines they receive in preparation for going overseas. "This is the worst cover-up in the history of the military," said an unidentified military health officer who fears for his job.

A shot from a syringe is leaving some U.S. servicemen and women on the brink of death.

"When the issue, I believe, of the use of the vaccine comes out, I believe it will make the Walter Reed scandal pale in comparison," said the health officer.

Lance Corporal David Fey, 20, has dialysis three days a week. His kidneys are failing, his military career is over, and he feels like his country abandoned him...

Fey is one of a growing number of U.S. servicemen and women who are getting sick after receiving vaccines. And the highly praised Department of Defense medical officer who spoke with Target 5 said that the number is up in the thousands. The symptoms range from joint aches and pains and arthritic symptoms to death.

The Department of Defense said that it encourages "healthcare workers and vaccine recipients to report adverse (reactions) events." But the military never reported Fey's reaction to the Centers for Disease Control and Prevention, and the FDA.

"I see the way the propaganda and information war is waged against America's sons and daughters and how patients are treated who claim to be injured from a vaccine," said the unidentified health officer. "That's troubling. That should trouble America." The officer said those who have claimed to have had adverse reactions to shots are treated like it is all in their heads.

Asked whether servicemen and women are receiving experimental vaccines, the officer said, "I would hope to God not. But from what I've seen, I would have to say yes."

The Department of Defense maintains that the vaccines given to U.S. troops are safe.