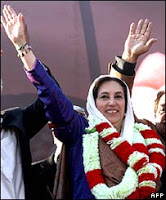 from bbc: Pakistani former Prime Minister Benazir Bhutto has been assassinated in a suicide attack.

Ms Bhutto - the first woman PM in an Islamic state - was leaving an election rally in Rawalpindi when a gunman shot her in the neck and set off a bomb.

At least 16 other people died in the attack and several more were injured.

President Pervez Musharraf condemned the killing and urged people to remain calm but angry protests have gripped cities across the country.

Security forces have been placed on a state of "red alert" nationwide.

There were no immediate claims of responsibility for the attack. Analysts believe Islamist militants to be the most likely group behind it.

Update: Bhutto said to 'hold Musharraf responsible' if she died
from raw story: In an e-mail sent to a confidant in the US two months ago, assassinated Pakistani opposition leader Benazir Bhutto said she would hold the country's current leader Pervez Musharraf "responsible" because his government did not do enough to provide for her security.

"I wld (sic) hold Musharraf responsible," Bhutto wrote to her US spokesman, Mark Siegel, in the October e-mail, which was reported Thursday afternoon by CNN's Wolf Blitzer. "I have been made to feel insecure by his minions, and there is no way what is happening in terms of stopping me from taking private cars or using tinted windows or giving jammers or four police mobiles to cover all sides cld (sic) happen without him."

Update: Washington Post reported the day before Bhutto assassination that 'US troops to head to Pakistan'
from washington post: Beginning early next year, U.S. Special Forces are expected to vastly expand their presence in Pakistan, as part of an effort to train and support indigenous counter-insurgency forces and clandestine counterterrorism units, according to defense officials involved with the planning.