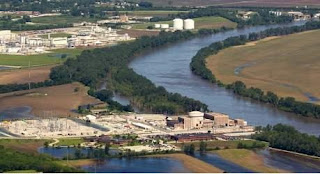 An ancillary flood wall collapsed in early hours of Sunday morning at the Fort Calhoun nuclear power plant. A news article at Omaha.com reported, "the 2,000-foot berm collapsed about 1:25 a.m. Sunday due to 'onsite activities,' OPPD officials said... Floodwater surrounded the nuclear plant's main electrical transformers after the Aqua Dam, a water-filled tubular levee, collapsed, and power was transferred to emergency diesel generators. OPPD officials said the transfer was precautionary because of water leaking around the concrete berm surrounding the main transformers." Apparently, the berm was inadvertently punctured in the course of ongoing work at the plant. The article informs in a calm tone, "water now surrounds the auxiliary and containment buildings, which are designed to handle flooding up to 1,014 feet above sea level. The river is at 1,006.3 feet and isn't forecast to exceed 1,008 feet." Another disaster successfully averted at the Nebraska power plant. One more article at the same site advises, "Flooding: The worst is yet to come". The Flood of 2011 on the Missouri will make for a long summer in Nebraska. The Army Corps of Engineers has a Riverwatch 2011 page to post current water levels along the Missouri. The early Sunday incident reminds us a crisis could quickly rise with the river!