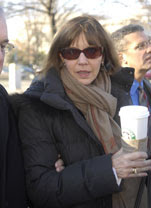 from thinkprogress: Today, the Washington Post’s Howard Kurtz reveals that Fox News has hired former New York Times reporter Judith Miller, who will be an on-air analyst and write stories for Fox’s website:

“She has a very impressive résumé,” says Senior Vice President John Moody. “We’ve all had stories that didn’t come out exactly as we had hoped. It’s certainly something she’s going to be associated with for all time, and there’s not much anyone can do about that, but we want to make use of the tremendous expertise she brings on a lot of other issues. … She has explained herself and she has nothing to apologize for.“

Miller, however, had more problems than her stories not turning out “exactly” as she had “hoped.” Miller has been a willing participant in the Bush administration’s quest to peddle lies to the American public. She was a key player in pushing false intelligence that led the public into the Iraq war, and was central to the Valerie Plame leak scandal.

On Sept. 7, 2002, she and fellow New York Times reporter Michael Gordon reported that Iraq had “stepped up its quest for nuclear weapons and has embarked on a worldwide hunt for materials to make an atomic bomb.” As proof, she cited unnamed “American intelligence experts” and unnamed “Bush administration officials.” Subsequently, Condoleezza Rice, Colin Powell, and Donald Rumsfeld all pointed to Miller’s story as justification for war. On April 22, 2003, she told PBS’s Newshour that WMD had already been found in Iraq: “Well, I think they found something more than a ’smoking gun.’”

In 2005, Miller went to jail for refusing to testify in the Valerie Plame scandal and reveal her conversations with Scooter Libby. Miller was often criticized for becoming too close with her Bush administration sources. While she was in jail, for example, Libby wrote to her about how much he admired her and urged her to “Come back to work — and life.”