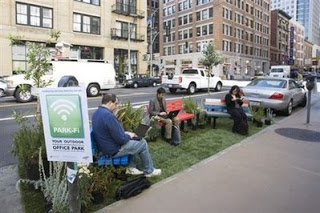 as usual being done under the anti-porn pretext...
'won't somebody please think of the children!'

from paul joseph watson: Both individual proposals to roll out free nationwide wi-fi Internet access across the United States contain language indicating that political websites deemed “offensive” will be filtered out and blocked.

The implementation of a universal wi-fi network covering the entire country is moving closer following the approval of House Representatives Anna Eshoo and Edward Markey after it was discovered the network would not interfere with incumbent wireless telcos such as AT&T and Verizon, who had raised concerns over potential signal interference.

Two competing parties, M2Z Networks and the FCC, are jockeying for the rights to roll out the network, but both have already stated their intent to install filters that block out pornography and anything else deemed “harmful”.

According to a Daily Tech report, “Both proposals stipulate that any free wireless offerings have mandatory content filters, preventing users from viewing any material that 'would be harmful to teens and adolescents,' including pornography and anything “contemporary community standards” deem as obscene. Free-speech advocates call this condition unconstitutional.”

As we have previously reported, similar free wi-fi networks on smaller scales include mandatory content filters that screen out even mildly political websites that are not part of the corporate establishment media.