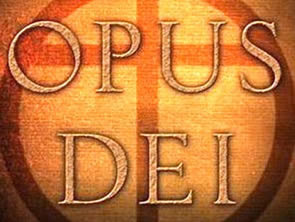 from afp: A French woman claiming to have been brainwashed by the secretive Catholic society Opus Dei is suing it for allegedly keeping her illegally as a domestic servant, she told AFP Tuesday.

Catherine T., who asked not to be identified by her family name, said she joined a hoteliers' school in northeastern France in 1985, aged 14, which she later discovered was run by associates of Opus Dei. She said she was forced to take vows and made to work as a domestic servant for virtually no pay.

Opus Dei responded in a statement that it was "not involved in the charges being brought" and had "nothing to be guilty about."

It will be the first ever trial targeting the organisation, branded a sect by some, which came to wide attention after featuring in the blockbuster novel and film "The Da Vinci Code".

"They assigned me a 'tutor' who was actually a kind of conscience instructor," Catherine told AFP. "I entered into the system.... You were forbidden to talk about it to your parents."

She said the group compelled her to take vows of obedience, poverty and chastity and for the following 13 years gave her jobs with organisations that her lawyer Rodolphe Bosselut said were linked to Opus Dei.

She said she was made to work 14-hour days, seven days a week, cleaning and serving. Staff paid her a salary and then reclaimed money from her by making her sign blank cheques, supposedly to pay her room and board, she alleged.

She added that staff accompanied her wherever she went, including on visits to the doctor. On these occasions she was taken to see an Opus Dei doctor who prescribed tranquilisers that left her "senseless".

Catherine weighed only 39 kilogrammes (86 pounds) in 2001 when her parents rescued her from the group. Lawyers first took legal action that year alleging "mental manipulation" among other charges. A nine-year investigation followed.

Two Opus Dei leaders are now summoned to appear in a Paris criminal court on September 22 and 23 on labour law charges of undignified punishment and not declaring her as an employee, lawyers said.

The lawsuit also targets the University and Technical Culture Association (ACUT) which ran the school. It said it had nothing more than a "cultural link" with Opus Dei.

"There is nothing to this case," said the ACUT's lawyer, Thierry Laugier, insisting that Catherine T. "was paid according to the work she did."