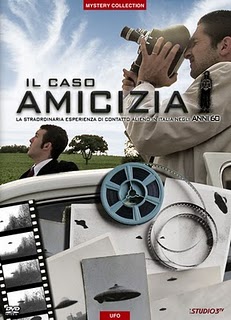 Memorial weekend italiano extraterrestre stravaganza concludes with the Friendship Case. Il Caso Amicizia comes to light with publication of a book "Mass Contacts" by Stefano Breccia and covered in a 2009 Michael Salla article. The exotic story spans from the mid-fifties to the late seventies and a highly regarded UFO encounter. The story includes telepathy, teleportation, underground and underwater bases, yet remains credible with "... the testimony of Bruno Sammaciccia, a highly qualified Italian scholar with degrees in psychology and psychiatry, and author of 160 books. Sammaciccia’s testimony contains his claims of direct physical contact with extraterrestrials over several decades." Sammaciccia and two friends first encounter two human-looking aliens in April 1956 after an old map took them to a castle near Rocca Pia, Italy. The aliens, although human in appearance, differed markedly in size from Earth inhabitants, one three feet and the other nine feet in height. The encounter marked a beginning in a long relationship between the aliens, who are collectively known as W56 and the close knit circle of Italians, who know and aid them.

Friendship has a cold war theme. W56 concerned about the human race's destructive capacity with nuclear weapons. The aliens ask the group "to help us help you". It is also a good and bad guy morality play with W56, radiating loyalty and love, and an opposing materialistic group, the contrarians or CTRs. The Contrarians, an amoral science-worshipping lot, are one reason W56 established bases in an attempt to counter them. "Eventually, the underground bases of Sammaciccia’s extraterrestrial friends was destroyed in 1978. Survivors had to leave the Earth but promised to return at a future time when humanity was ready for a more ethical future of humanity interacting with extraterrestrials," writes Salla.

The technology makes an extraordinary story and borders on magical. Breccia refers to unstable corridors and underground facilities, which enable W56 to open and close bases like a suitcase. Food is teleported and aliens communicate through regular radio and television with humans. Perhaps, the most astonishing aspect, is the huge W56 base under the Adriatic Sea along the Italian coast or a birdseye view of a nuclear test by a UFO. Nicola Duper, another member of the Friendship, shares his separate story here. Il Caso Amicizia makes clear Italians didn't need UFO B-movies in the fifties, they had the real thing--an astonishing story!