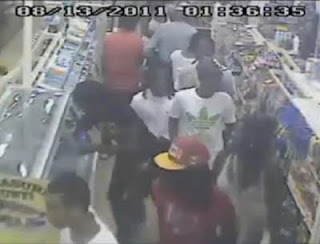 From ‘Flash Mob’ to ‘Flash Rob’: 5 Things to Know About Crime Waves 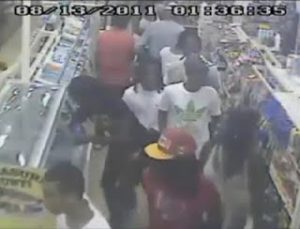 from ibtimes: A flash mob in Germantown, Maryland robbed a local 7-Eleven store in under one minute Saturday night. Surveillance footage of the incident shows a group of teenagers walking wordlessly into the convenience store. They are followed seconds later by a stream of people, presumably juveniles, many covering their faces with shirts and hoods. The group walks around the store, taking as much as possible, before leaving 40 seconds later.

Montgomery County Police believe the event was organized online, likely on Facebook. A total of 28 individuals were captured in the videotape, and investigators say they have identified about half of them. The video was posted online, and many members of the community came forward with tips.

Flash mobs aren't new, nor are they unique to Maryland. They are an increasingly frequent trend that often have severe results, and townships and police departments around the country are trying to figure out how to combat the problem.

Here are the five things to know about flash mobs:

1. Flash mobs appear suddenly and without warning. As insinuated by their name, flash mobs have little rhyme or reason. They are generally organized through technology -- either on social media networks like Facebook and Twitter, or through text message, BlackBerry Messenger or email. Comprised mostly by young people, flash mobs can be peaceful or violent. Sadly, recent flash mobs have trended toward the anarchic.

2. That doesn't mean they can't be stopped. The city of Philadelphia has been experiencing some of the country's worst flash mobs over the past year, spurring Mayor Michael Nutter to institute a curfew for minors last weekend. In the Center City and University City neighborhoods, anyone 17 or younger must be home by nine p.m. In all other areas of the city, anyone under the age of 18 must be indoors by midnight, and anyone under 13 must be off the streets by 10 p.m. With just one weekend under the new law, police apprehended around 50 kids who were out too late. The juveniles will face fines for as much as $300.

3. Flash mobs are an international phenomenon. Along with Philadelphia and Maryland, there have also been flash mob attacks in Ohio, Illinois, Milwaukee, Iowa and Washington. Last week's riots in the UK were sparked by the same communication methods that are employed in the U.S. The riots started when a sudden, organized march materialized in Tottenham in North London. When mounted police got involved, both sides panicked, setting off looting, arson and general mayhem. Thanks mostly to BBM, the BlackBerry instant messaging service, youths all over the country began amassing in commercial centers, breaking into stores and destroying everything in their path. Five people were killed over five days, in incidents police are considering to be murder.

4. Who is to blame? It's easy to blame the technology for the crimes, but social media networks are only a tool and not a cause. In London last week, the media tried to grasp at the cause of the riots, coming up with a number of possibilities, including high unemployment, racial discrimination, and even third-world immigration policy. But in the end, as rioters torched cars and looted as much as they could carry, it appeared to be about little more than opportunity. If given a chance, it seems that some members of society will embrace their violent instincts.

5. Yes, these kids have parents. Mayor Nutter recently lambasted parents who had lost control of their children. He blames inattentive parents for creating an environment in which unsupervised teenagers can run amok at their pleasure. Nutter called parents who give their kids money to go out at night "ATMs" and called ineffectual fathers "sperm donors." As part of the curfew, the parents of any child caught out after hours will receive fines of up to $500 for the first offense.