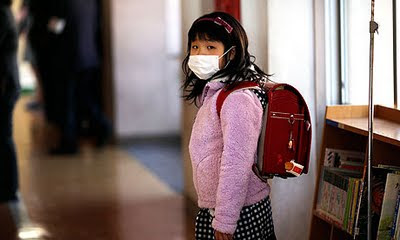 fukushima parents dish the dirt in protest over radiation levels

from guardian: Furious parents in Fukushima have delivered a bag of radioactive playground earth to education officials in protest at moves to weaken nuclear safety standards in schools. Children can now be exposed to 20 times more radiation than was previously permissible. The new regulations have prompted outcry. A senior adviser resigned and the prime minister, Naoto Kan, was criticised by politicians from his own party.

Ministers have defended the increase in the acceptable safety level from 1 to 20 millisieverts per year as a necessary measure to guarantee the education of hundreds of thousands of children in Fukushima prefecture, location of the nuclear plant that suffered a partial meltdown and several explosions after the earthquake and tsunami on 3/11.

It is estimated that 75% of Fukushima's schools may have radiation levels above the old safety level of 1 millisievert. The local authorities in Koriyama have tried to ease the problem by digging up the top layer of soil in school and day centre playgrounds, but residents near the proposed dump site have objected. The new standard of 20 millisieverts a year – equivalent to the annual maximum dose for German nuclear workers – will mean those schools remain open, but parents and nuclear opponents are angry that safety concerns are being ignored.

A group claiming to represent 250 parents in Fukushima visited the upper house of parliament and presented government officials with a bag of radioactive dirt from the playground of one of the affected schools. A geiger counter clicked over it with a reading of 38 millisieverts. "How dare they tell us it is safe for our children," said Sachiko Satou of the Protect Fukushima Children from Radiation Association. "This is disgusting. They can't play outside with such risks. If the government won't remove the radioactive dirt then we'll do it ourselves and dump it outside the headquarters of Tokyo Electric."