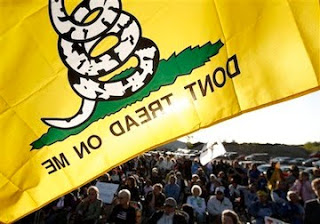 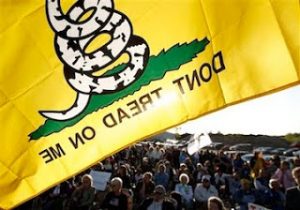 from the upshot: An Arizona man is in trouble with his homeowners' association over flying the Gadsden flag, which features a coiled rattlesnake and the words "Don't Tread on Me." The flag has been adopted by members of the tea party movement for its association with the American Revolution, but Andy McDonel tells the New York Times that he has hung the flag from his roof simply for its historical significance.

Arizona has a state statute that allows Arizonans to fly "the Stars and Stripes, the state flag, flags representing Indian nations as well as the official flags of the Army, Navy, Air Force, Marines and Coast Guard," the Times reports.

McDonel's homeowners' association is strictly interpreting that law to ban the flying of any other flags, including the Gadsden. The American Civil Liberties Union is defending McDonel, saying the homeowners' group is taking too strict a view of the statute and restricting McDonel's right to free speech. McDonel is chronicling his struggle on a blog, where he is asking for donations for a potential legal battle. McDonel isn't the only person to run into a dispute over the historic flag.