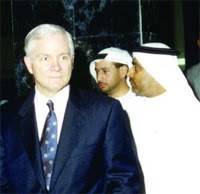 from alertnet: U.S. Defense Secretary Robert Gates on Sunday canceled a long-planned, four-country trip to Latin America less than 24 hours before departure to help prepare a report for Congress on the Iraq war, the Pentagon said.

"Events this week require the Secretary's participation in policy meetings on Iraq in advance of the July 15th benchmark report," the Defense Department said.