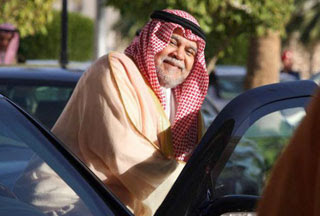 from presstv: Saudi Prince Bandar bin Sultan, the kingdom's former ambassador to the United States, is reportedly under house arrest over a conspiracy against the monarch. Saad al-Faqih, head of the opposition group Islamic Reform Movement, told Arab-language TV al-Alam that Prince Bandar has been disappeared and the media has published no word from the ex-diplomat's whereabouts since nearly three months ago. According to al-Faqih, the prince first disappeared in Britain but he returned to the kingdom shortly afterwards. He added that after Saudi officials discovered that he had provoked 200 agents working for the Saudi security service to stage a coup against King Abdullah, he was put under house arrest. Al-Faqih said people close to the king had disclosed Bandar's plots and foiled them. He said Saudi sources believe that intelligence provided by some Arab countries help the Saudi monarch foil Prince Bandar's conspiracy. Power struggle between members of the Saudi royal family has been common as power is shared among some 200 princes out of the estimated 7000 family members. Known as Bandar Bush because of his close relations with former US President George W Bush, the prince is son of Crown Prince Sultan bin Abdul Aziz.

when bill met il:
clinton gets journos released from nkorea
from ap: North Korean leader Kim Jong Il issued a "special pardon" freeing two jailed American journalists after talks with former U.S. President Bill Clinton, North Korea's official news agency announced Wednesday. Clinton, who arrived in North Korea Tuesday on an unannounced visit, met with the reclusive and ailing Kim for talks described by Pyongyang as "exhaustive." It was Kim's first meeting with a prominent Western figure since his reported stroke nearly a year ago. The release of Laura Ling and Euna Lee, who were arrested March 17 near the China-North Korea border, was a sign of North Korea's "humanitarian and peace-loving policy," the Korean Central News Agency reported.

in actions reminiscent of the cold war,
US monitoring russian subs off east coast
from nytimes: A pair of nuclear-powered Russian attack submarines has been patrolling off the eastern seaboard of the United States in recent days, a rare mission that has raised concerns inside the Pentagon and intelligence agencies about a more assertive stance by the Russian military. The episode has echoes of the cold war era, when the United States and the Soviet Union regularly parked submarines off each other’s coasts to steal military secrets, track the movements of their underwater fleets — and be poised for war.