geopolitiks: coups & covert ops – trained & made in the USSA 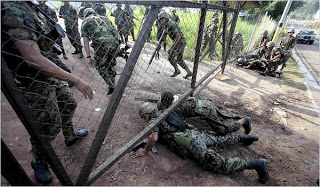 from nytimes: President Manuel Zelaya of Honduras was ousted by the army on Sunday, capping months of tensions over his efforts to lift presidential term limits. In the first military coup in Central America since the end of the cold war, soldiers stormed the presidential palace in the capital, Tegucigalpa, early in the morning, disarming the presidential guard, waking Mr. Zelaya and putting him on a plane to Costa Rica. Mr. Zelaya, a leftist aligned with President Hugo Chávez of Venezuela, angrily denounced the coup as illegal. “I am the president of Honduras,” he insisted at the airport in San José, Costa Rica, still wearing his pajamas. Later Sunday the Honduran Congress voted him out of office, replacing him with the president of Congress, Roberto Micheletti. The military offered no public explanation for its actions, but the Supreme Court issued a statement saying that the military had acted to defend the law against “those who had publicly spoken out and acted against the Constitution’s provisions.”

and now, the ugly reality is:
key leaders of honduras military coup trained in US
from southern studies: At least two leaders of the coup launched in Honduras today were apparently trained at a controversial Department of Defense school based at Fort Benning, Georgia infamous for producing graduates linked to torture, death squads and other human rights abuses. Leftist President Manuel Zelaya was kidnapped and transported to Costa Rica this morning after a growing controversy over a vote concerning term limits. Over the last week, Zelaya clashed with and eventually dismissed General Romeo Vasquez – who is now reportedly in charge of the armed forces that abducted the Honduran president. According to the watchdog group School of Americas Watch, Gen. Vasquez trained at the Western Hemisphere Institute for Security Cooperation at least twice – in 1976 and 1984 – when it was still called School of Americas. The Georgia-based U.S. military school is infamous for training over 60,000 Latin American soldiers, including infamous dictators, “death squad” leaders and others charged with torture and other human rights abuses. SOA Watch’s annual protest to shut down the Fort Benning training site draws thousands. 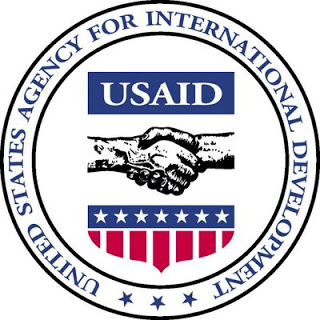 from kurt nimmo: Ignore the neocons who whine that Obama and the Democrats are not doing enough to support the protesters arrayed in opposition to recently re-elected Mahmoud Ahmadinejad and the mullahs in Iran. “The Obama administration is moving forward with plans to fund groups that support Iranian dissidents,” reports USA Today. “The U.S. Agency for International Development (USAID), which reports to the secretary of state, has for the last year been soliciting applications for $20 million in grants to ‘promote democracy, human rights, and the rule of law in Iran,’ according to documents on the agency’s website. The final deadline for grant applications is June 30.” Or put another way, the CIA will fund the opposition and this effort will be run out of Hillary Clinton’s State Department. Public records show that USAID has long been a front for CIA intelligence gathering, as well as a conduit for CIA funding to foreign governments and agencies, according to Bill Keisling. Pages 607 to 613 of the so-called CIA Family Jewels document describes a “joint CIA/USAID training program.” Andrew Natsios, USAID’s former head, stated unequivocally in a widely distributed 2003 speech that even foreign USAID-funded contractors and NGOs “are an arm of the U.S. government.” And the role of the much smaller NED was made clear when Allen Weinstein, one of its founders stated in a 1991 Washington Post article that, “a lot of what we do today was done covertly 25 years ago by the CIA.” It is well documented that the CIA’s USAID, along with the Pentagon, the National Endowment for Democracy (NED), and the Venezuelan mafia in Miami attempted to overthrow Hugo Chávez. “It has been affirmed that the coup against Chávez was CIA-made,” writes Jean-Guy Allard of Granma International. “The CIA and the State Department maintain various fronts in the country, as they always do.”