china may modify weather for olympics

from xinhua: If bad weather threatens the August 8 opening of Beijing's Olympic Games, then meteorologists may change the weather, according to a Chinese meteorology official. Chen Zhenlin, a vice director with the China Meteorological Administration (CMA), made the statement Tuesday afternoon at a press conference held at the Beijing International Media Center.

dog meat taken off china menus for olympics
from kprc: Patrons at some restaurants in Beijing won't be able to order any canine cuisine during next month's Olympics. Dog meat has been struck from the menus of officially designated Olympic restaurants, and Beijing tourism officials are telling other outlets to discourage consumers from ordering dishes made from dogs, the official Xinhua News Agency reported Friday.

from ap: The leaders of 43 nations from Europe, the Middle East and North Africa have launched a Union for the Mediterranean, a brainchild of French President Nicolas Sarkozy that aims to improve cooperation in the region with practical projects that parallel efforts toward Mideast peace.

from infowars: David Davis wins by a mile and David Icke gets the very few votes he always said he would get in an election in which his focus was information nationally and internationally, not winning irrelevant votes within the small constituency area in which this election took place... While the corrupt system had its election and crowned its impostor ‘king’ in its attempt to hijack the Big Brother ‘debate’ in Britain, far more people are now aware of the real Big Brother – the one that David Davis and his sidekick from ‘Liberty’, Shami Chakrabarti, have no intention of talking about, let alone exposing. David Davis, an aloof and arrogant man it turned out, refused to debate the wider aspects of the Orwellian State with David Icke and even barred him from his public events. And this is the new standard-bearer for the opposition to ‘Big Brother’? It is all a scam. 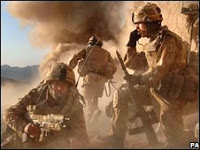 from bbc: Almost half of UK military personnel are ready to leave the forces, a Ministry of Defence survey suggests. Some 47% of Army and Royal Navy respondents and 44% of those in the RAF said they regularly felt like quitting. Among the concerns raised by the 9,000 servicemen and women surveyed were the frequency of tours, levels of pay and the quality of equipment and housing. The Ministry of Defence said the survey revealed “areas of concern” but that conditions were being improved.

from guardian: The cabinet's most senior intelligence adviser was in a coma last night five days after being found unconscious at his London home, according to Whitehall officials. Alex Allan, described by his colleagues as an extremely fit man and keen on sports, was rushed to hospital on Monday after he was discovered unconscious at his home where he has lived alone since the death of his Australian wife last year. "He is seriously ill and undergoing tests to try and find out what is in his system," an official said yesterday. Officials dismissed as "nonsense" suggestions that he might have been poisoned.

russia starts large-scale naval exercise in the pacific
from ria novosti: Over 20 combat and auxiliary ships from Russia’s Pacific Fleet started on Tuesday a large-scale naval exercise in the Sea of Japan, which includes live firing drills, a fleet spokesman said... According to the exercise scenario, the Russian naval task force and shore-based naval aircraft are tasked with the search and destruction of an ‘aggressor force’ attempting to establish a beachhead on the Russian coast. The ships will conduct a series of live firing drills against ground, surface, and air targets.

situation in pakistan spinning out of control
from daily times: The use of suicide bombings has allowed religiously radical forces to reach beyond their NWFP strongholds and strike with impunity at the core of Pakistan, including urban centres, and as it is, things are spinning out of control, according to a commentary released on Monday by Stratfor.

nato & US forces suffer deadliest month in afghanistan
from afp: June was the deadliest month for foreign troops in Afghanistan since the 2001 fall of the Taliban and the second in a row in which casualties exceeded those in Iraq, official figures showed Tuesday... June accounted for more than 40 percent of the 122 deaths of foreign soldiers in Afghanistan during 2008, according to the independent website icasualties.org.

from telegraph: American commanders worry that Israel will feel compelled to act within the next 12 months with no guarantee that they can do more than slow Iran's development of a weapon capable of destroying the Jewish state. Gaps in the intelligence on the precise location and vulnerabilities of Iran's facilities emerged during recent talks between Admiral Mike Mullen, the Chairman of the American Joint Chiefs of Staff, and Israeli generals, according to an official familiar with the discussions who has briefed Iran experts in Washington and London.