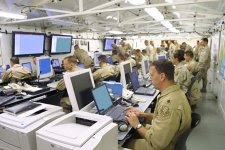 US War Game Sees Perils of Israeli Strike Against Iran

from nytimes.com: A classified war simulation held this month to assess the repercussions of an Israeli attack on Iran forecasts that the strike would lead to a wider regional war, which could draw in the United States and leave hundreds of Americans dead, according to American officials. The officials said the so-called war game was not designed as a rehearsal for American military action — and they emphasized that the exercise’s results were not the only possible outcome of a real-world conflict.

But the game has raised fears among top American planners that it may be impossible to preclude American involvement in any escalating confrontation with Iran, the officials said. In the debate among policy makers over the consequences of any Israeli attack, that reaction may give stronger voice to those in the White House, Pentagon and intelligence community who have warned that a strike could prove perilous for the United States.

The results of the war game were particularly troubling to Gen. James N. Mattis, who commands all American forces in the Middle East, Persian Gulf and Southwest Asia, according to officials who either participated in the Central Command exercise or who were briefed on the results and spoke on condition of anonymity because of its classified nature. When the exercise had concluded earlier this month, according to the officials, General Mattis told aides that an Israeli first strike would be likely to have dire consequences across the region and for United States forces there.

The two-week war game, called Internal Look, played out a narrative in which the United States found it was pulled into the conflict after Iranian missiles struck a Navy warship in the Persian Gulf, killing about 200 Americans, according to officials with knowledge of the exercise. The United States then retaliated by carrying out its own strikes on Iranian nuclear facilities.

The exercise was designed specifically to test internal military communications and coordination among battle staffs in the Pentagon; in Tampa, Fla., where the headquarters of the Central Command is located; and in the Persian Gulf in the aftermath of an Israeli strike. But the exercise was written to assess a pressing, potential, real-world situation.

In the end, the war game reinforced to military officials the unpredictable and uncontrollable nature of a strike by Israel, and a counterstrike by Iran, the officials said.

American and Israeli intelligence services broadly agree on the progress Iran has made to enrich uranium. But they disagree on how much time there would be to prevent Iran from building a weapon if leaders in Tehran decided to go ahead with one.

Is Lewis-McChord really 'most troubled base in the military'?
from mcclatchydc.com: Is there something wrong with Joint Base Lewis-McChord? The question attracted wide media attention last week after a soldier stationed there for the last decade, 38-year-old Army Staff Sgt. Robert Bales, allegedly killed 16 Afghan civilians, including nine children, in a March 11 rampage. Reports have surfaced that trauma and stress from multiple combat tours, possibly mixed with alcohol, might have sent the married father of two over the edge.

Some connected the massacre to other problems at the base south of Tacoma, Wash.: a record number of suicides, several investigations into the treatment of soldiers diagnosed with post-traumatic stress disorder, a "kill team" convicted of murdering civilians for sport in Afghanistan and a string of other crimes involving present and past soldiers.

They resurrected a label given by the military newspaper Stars and Stripes in 2010: the "most troubled base in the military."

"There is nothing different here than at most places," he said. "Again, those things happen. Everybody knows (the rampage) doesn't reflect our standards and our values."

Others aren't so sure that the base should get a free pass. Army veteran Jorge Gonzalez, who runs a Lakewood, Wash., coffee shop that assists soldiers, faulted Lewis-McChord's leadership and wondered why it "keeps happening over and over here."