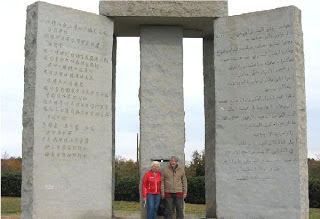 A startling context fits Georgia Guidestones into much broader spiritual framework, provided by Rich Anders in article, "Investigating the Georgia Guide Stones." This broader view incorporates timeless elements and ancient megaliths, makes Anders writing of interest. The Georgia Guidestones were built with same purpose of 50,000 similar structures across the Northern Hemisphere. Anders believes agents are ancient Egyptian gods (serpent clan), who attempt to influence an imminent "change of worlds" to occur December 21, 2012. The writer implies nature of the next change, "according to the Maya it’s the turn of the present world to be destroyed by fire and the date is December 21st, 2012."

R C Christian is pseudonym of a front man who paid masons of Elberton, GA to build guide stones with the monument finished in 1980. Anders concludes engraved messages of the stones are an attempt to usurp spiritual power of Christians:

"The ten topics written in the stone slabs of the monument don’t provide any connection to Christian beliefs. This makes clear that a fake “Christian” is trying to give with the guide stones the impression that he is the Savior, who is expected by the Christian religion to come before the end of this world. He is attempting to integrate into his project the spiritual power of the biggest religion on Earth namely Christianity."

The Universe is primarily a spiritual structure in Anders view and the next "change of world" will be determined to large degree by the predominant spiritual energies present just prior to change.  The controversial engraved message on human population, “maintain humanity under 500,000.000 in perpetual balance with nature,” doesn't mandate murder of majority of humanity, according to Anders, but more likely a resolution after a catastrophe which may accompany a "change of worlds."

It is notable, Anders believes deception simply loses its power when it gets exposed:

"By exposing the spiritual background and purpose of the “Georgia Guide Stones” with this article the spiritual mechanisms the monument stands for have collapsed. The end of this world and the ensuing new world will be subjected to the spiritual patterns of the prevalent mass consciousness and this is Christianity."

You may not buy Anders' spiritual message but his framework is still of interest. What is the purpose of the Georgia Guidestones? Does Anders know something you don't?