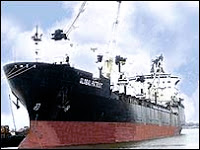 from afp: Russian bombers accompanied by Nato fighter jets have completed a patrol off the north west coast of the United States, the Russian air force said on Wednesday, Interfax reported. "NATO fighter jets accompanied the planes of long range aviation in the area of Alaska during the air patrol," Alexander Drobyshevsky, assistant to the head of the Russian air force, was quoted as saying... Russian President Vladimir Putin announced in August 2007 that Moscow was resuming with immediate effect the Cold War practice of sending strategic bombers on long-range flights well beyond its borders. 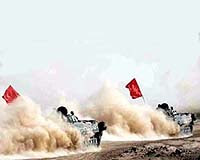 from afp: Taiwan's defence ministry Tuesday unveiled plans to hold annual war games simulating a Chinese invasion of the island, despite president-elect Ma Ying-jeou's pledge to ease tensions with Beijing. According to draft plans, this year's war games will begin with a computerised drill in April and peak in September with a large-scale live-fire military exercise, the ministry said. "The exercises are aimed to counter the growing Chinese communist threat," defence ministry spokeswoman Chi Yu-lan said, without providing further details.

US cargo ship fires in suez canal
from ap: An American cargo ship under contract to the U.S. Navy opened fire on a small Egyptian boat while moving through the Suez Canal, the U.S. military said Tuesday in a statement. Egyptian authorities said at least one man was killed, but the U.S. said it had no reports of casualties. The Global Patriot, which was under short term charter to the navy's Military Sealift Command, entered the canal from the Red Sea at Suez after dark Monday when it was approached by several small boats, according to both U.S. and Egyptian officials.

from press tv: An American nuclear submarine has crossed the Suez Canal to join the US fleet stationed in the Persian Gulf, Egyptian sources say... The deployment comes as recent reports allege that US Vice President Dick Cheney is seeking to rally the support of Middle Eastern states for launching an attack on Iran. This is while US officials deny that Cheney's Mideast tour is linked to a possible military attack on Iran.