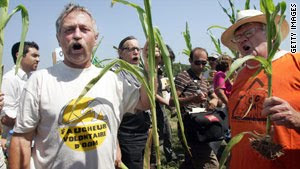 The French vineyard is the same field attacked last year when the plants were only cut. But the security features installed after that incident kept authorities at bay while the group accomplished its mission yesterday. Speaking for the group, Olivier Florent told Le Figero that they condemned the use of public funds for open-field testing of GMOs "that we do not want."

Pitching tents in the rain near France’s National Institute for Agronomic Research (INRA) site in Colmar the night before, the group waited until 5 AM before converging on the site and locking the gates behind them. They uprooted all 70 plants, then submitted to arrest.

This is the second attack on GMO crops to make international news this year. In July dozens of people destroyed two experimental corn crops in Spain. In an anonymous press release, they wrote, “This kind of direct action is the best way to respond to the fait accompli policy through which the Generalitat, the State and the biotech multinationals have been unilaterally imposing genetically modified organisms.”