gonzales: ‘focused on protecting our kids’ 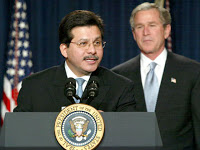 from thinkprogress: Attorney General Alberto Gonzales announced this morning: “I’m not going to resign. I’m going to stay focused on protecting our kids.” Speaking before a Project Safe Childhood event, Gonzales told reporters he plans “to go up to the Congress and provide further clarification” about the U.S. Attorney purge, and claimed that his department has been “tremendous in the area of public corruption.”

Gonzales’ declaration that he intends to stay “focused on protecting our kids” comes as he launches a cross-country PR tour to save his job:

“CBS News has learned Attorney General Alberto Gonzales will take to the road to fight for his job, spending the next week traveling the country to see as many US Attorneys as he can. One source says he’ll apologize not for firing eight of their colleagues but for the way he handled it. [Gonzales] will start his mea culpa tour tomorrow in St. Louis.” [CBS Evening News, 3/21/07]

“A day after Bush gave his attorney general a vote of confidence, Gonzales appeared to be launching a campaign to save his job by repairing relations with prosecutors in the field and reaching out to political supporters. His office released a dozen testimonials from Latinos and law enforcement groups, with many saying that Gonzales, the first Latino attorney general, was being unfairly held accountable for the fiasco.” [LA Times, 3/22/07]

“Embattled Attorney General met this afternoon with several Republican Senators, including Orrin Hatch, Jon Kyl, John Cornyn and Jeff Sessions, GOP sources said. The lunch meeting held at the Department of Justice, sources said, was initiated by Gonzales. A source familiar with the meeting says it was an attempt by Gonzales to reach out to Republicans who have been decidedly unhappy with how he has handled the US Attorney mess.” [ABC, 3/21/07]