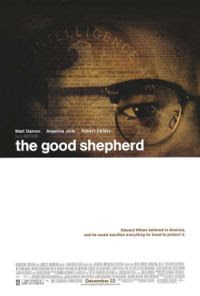 from wikipedia: The value of secrecy — commitment to honor and discretion — has been embedded in Edward Wilson (Matt Damon) since childhood. As a dedicated, optimistic student at Yale University, he is recruited to join the Order of Skull and Bones, a secret society designed to breed the world leaders of tomorrow. Wilson’s acute intelligence, immaculate reputation, and sincere belief in American values render him a prime candidate for a career in intelligence. During the Second World War, General Sullivan (Robert De Niro) recruits him to the new Office of Strategic Services, a precursor to the Central Intelligence Agency. As one of the Office’s covert founders, duplicity is required of Wilson as he navigates a world where nothing can be accepted at face value.

Over his thirty-year career, Wilson’s methods are adopted as standard operating procedure and he becomes a respected veteran in his field, but his idealism is eroded by a growing suspicious nature, reflective of a world settling into the long paranoia of the Cold War, and an escalating conflict with his volatile Komitet Gosudarstvennoy Bezopasnosti (KGB) counterpart. In the end, he sacrifices everything in the name of serving the country he loves, including his devoted wife Clover (Angelina Jolie), his children, and himself.

One response to “the good shepherd”