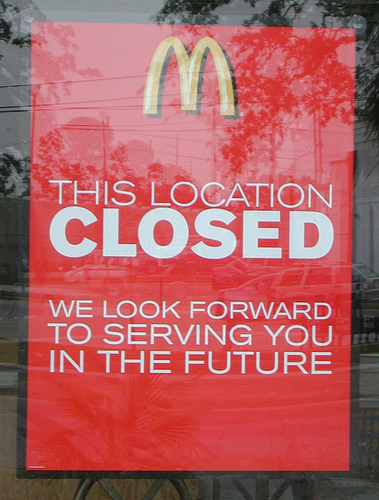 #GoodNewsNextWeek: McDonald’s Is Closing Hundreds Of Stores This Year

from fortune.com: The
restaurant company closed 350 stores in early 2015, on top of the 350 it
had already said it would shutter, as the burger purveyor seeks to
stanch sales declines.

McDonald’s shuttered 350 poorly performing stores in Japan, the United
States, and China the first three months of 2015 as part of its plan to
boost its sagging profits.

Those previously unannounced closings, disclosed on a conference call
with Wall Street analysts on Wednesday, are on top of the 350
shutterings the world’s largest restaurant chain had already targeted
for the year. While those 700 store closings this year represent a
fraction of the 32,500 or so restaurants worldwide, they show how
aggressive McDonald’s is getting in pruning poorly attended locations
that are dragging down its results.

Earlier on Wednesday, McDonald’s had reported
an 11% decrease in revenue and a 30% drop in profit for the first three
months of year, a continuation of its troubles in the last two years as
it has struggled to compete with new U.S. competitors, a tough economy
in Europe and a food safety scare in Asia.

McDonald’s CFO Kevin Ozan told analysts that the shuttered stores in
China, where comparable sales fell 4.8% in the first quarter, had been
underperforming for years. In Japan, where McDonald’s is still reeling
from the food safety scare last summer, the stores closed stores were
“heavy loss maker restaurants.” As for the U.S., comparable sales were
down 2.3%, one of their biggest drop in years as chains like Chipotle
ate into sales.