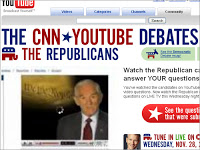 from raw story: Frequently using their YouTube-submitted questions as a jumping off place for attacks on rivals, the Republican presidential contenders took on a range of queries - from silly to serious - posed by ordinary Americans in Wednesday evening's GOP debate in St. Petersburg, FL...

As the evening's focus later shifted to government spending, libertarian-leaning candidate Rep. Ron Paul (R-TX) was asked if he could name three federal programs he would cut from the budget.

Sen. McCain responded to Paul's comments moments later. "I've heard him now in many debates talking about bringing out troops home, and about the war in Iraq and how it's failed. And I want to tell you," he said, facing Paul, "that kind of isolationism, sir, is what caused World War II... we allowed Hitler to come to power with that kind of attitude of isolationism and appeasement." McCain, who spent Thanksgiving in Iraq, told Paul that the troops' message was "let us win."

"The real question you have to ask is why do I get the most money from active-duty officers - military personnel," Paul responded. "I'm not an isolationist."

update: cnn polls show ron paul winner of debate
from black hills portal: The CNN/YouTube GOP presidential debate Wednesday night brought Republican jabs out in the open with Ron Paul showing a clear lead in CNN Polls. There is no doubt that presidential canidate Ron Paul isn't a polished public speaker as this debate brought to light, but what doctor or OB/GYN is. According to early numbers on the CNN website the clear winner to the YouTube GOP debate was Ron Paul.