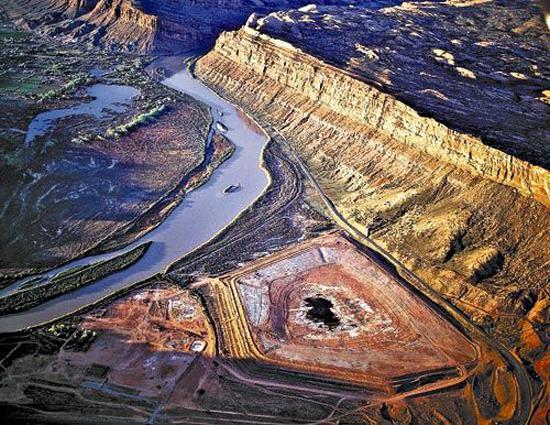 from Alternet.org: The U.S. Forest Service has decided to allow Energy Fuels Resources,
Inc. to begin operating a uranium mine near Grand Canyon National Park.
The Canyon Mine, located on the Kaibab National Forest six miles south
of the park, threatens cultural values, wildlife and endangered species,
and increases the risk of soil pollution and pollution and depletion of
groundwater feeding springs and wells in and near Grand Canyon.


The mine was originally approved in 1986 and was the subject of
protests and lawsuits by the Havasupai tribe and others objecting to
potential uranium mining impacts on regional groundwater, springs,
creeks, ecosystems and cultural values associated with Red Butte, a
Traditional Cultural Property.


Mines that were closed nearly three decades ago continue to pollute
streams in the area. The Orphan Mine at the South Rim of Grand Canyon
closed in 1969 but still contaminates Horn Creek with radioactive
runoff.  Recently, the National Park Service began a clean-up effort for
that mine that will cost taxpayers millions.

Related:
Radioactive residues have been accumulating in and around Grand Canyon for more than five decades

The Canyon Mine falls within the one-million-acre “mineral
withdrawal” approved by the Obama administration in January 2012 to
protect Grand Canyon’s watershed from new uranium mining impacts. The
withdrawal prohibits new mining claims and mine development on old
claims lacking “valid existing rights” to mine. In April 2012, the
Forest Service determined that there were “valid existing rights” for
the Canyon mine, and in June it issued a report trying to explain its
decision to allow the mine to open without updating the 27-year-old
environmental review. The Havasupai tribe and three conservation groups
are challenging this.
Please speak up against the mine and support protection of Grand Canyon and its watershed.