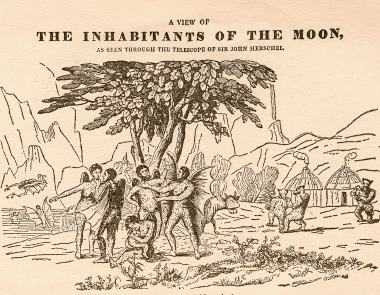 The New York Sun, founded in 1833 as a penny press paper, catered to a wide audience with narrative style and a cheaper price. On August 25, 1835, the first of six articles appeared  in the paper that became known collectively as, "The Great Moon Hoax".

The first article brought increased sales and entertainment. Supposedly, the series was reprinted from a science journal in Edinburgh, Scotland, which had already ceased publication. Articles reported "discoveries" by astronomer Sir John Hershel at new observatory in South Africa. Writing style of the day can also fascinate today's reader. A nice treatment of the hoax at Universe Today provides following description of the man bats (pictured). "...They averaged four feet in height, were covered, except on the face, with short and glossy copper-colored hair, and had wings composed of a thin membrane, without hair, lying snugly upon their backs from the top of the shoulders to the calves of their legs.”

On April Fool's Day, 365 Days of Astronomy produced a great podcast of Moon Hoax, which makes for great listening! A tip of the hat goes to Universe Today for the link. Museum of Hoaxes website provides complete treatment and worth a visit. It's free sci-fi from 1835!