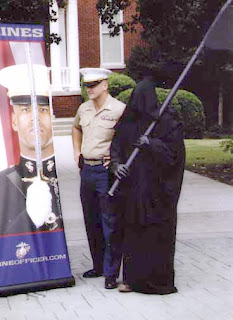 from bill fisher: Walking past the buildings of GCSU on an overcast, cool morning on a Thursday in September, a Marine Recruitment booth was spotted near "the Fountain," a common meeting area and major campus thoroughfare... Within two hours a cloak was donated, a scythe fabricated and the Grim Reaper began a conversation with the young recruiter.

Marine Recruiter: "I wish my buddies were here."

GR: "I do not question your heroism. You have made a great sacrifice for our nation, you have given yourself for a purpose greater than yourself. You are an American Hero."

GR: "The architects of this illegal and immoral war in Iraq are responsible for the rapes, mutilations, dehumanization and deaths of tens of thousands of men, women and children... Iraqis, coalition forces, and American servicemen and servicewomen. The Administration in Washington has summoned me. That is why I am here today. That is who I am here for." 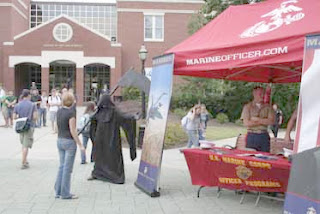 As a crowd gathered, a few students wandered close to him and said "fuck you." ... A young man was heard saying "It's un-American! Those soldiers are fighting and dying so he can stand there and do that!"

The Reaper thought "they are not dying for my right to free speech, if that's what he means by 'do that.' I feel no threat by Al-Qaeda to my right to be here, peaceably, passively. I am much more threatened by the hostility I hear in your voice, and from the policeman eyeing me as he circles in closer. But if these Marines are sacrificing themselves for my right to stand here, then it is my responsibility to honor them by standing here."