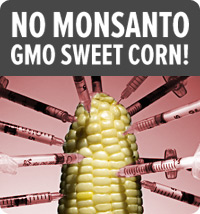 from credo action: Right now, Monsanto, the corporation responsible for producing roughly 90% of genetically modified seeds around the globe, is working to bring their new, GMO sweet corn to a grocery store aisle or farmer’s market near you.

Unlike Monsanto’s other GMO crops — which are primarily fed to animals — this sweet corn is intended for direct human consumption.

This is the first time Monsanto has engineered a vegetable that could be served straight to your dinner table. And if this unlabeled, and potentially toxic crop succeeds, Monsanto is sure to bring us even more.

As an activist and consumer, you are in a powerful position to pressure leading U.S. grocery stores to reject Monsanto’s new GMO corn.