from new york times: Two firefighters were killed yesterday battling a blaze in the Deutsche Bank skyscraper, a vacant relic of the Sept. 11 terrorist attack that was in the process of being dismantled.

The firefighters were among hundreds who poured into ground zero all afternoon to fight the high-rise fire, which was finally brought under control after seven hours.

At least five others were hospitalized with smoke-related injuries that were not believed to be life threatening.

The building, at 130 Liberty Street, had stood as a ghost since parts of the World Trade Center towers came crashing into it nearly six years ago, leaving it severely damaged and filled with toxic debris, including asbestos, dioxin, lead and chromium.

‘no danger’ of collapse at deutsche bank, mayor says
from new york times: Two firefighters are dead from injuries they sustained fighting a fire at the vacant Deutsche Bank building at 130 Liberty Street opposite ground zero today, Mayor Michael R. Bloomberg confirmed at a news conference this evening. Mr. Bloomberg said the fire was not yet under control but there was “no danger” that the building would collapse.

He identified one of the dead as Firefighter Joseph Graffagnino, 34, of Brooklyn, who had with the department for eight years. The other firefighter was subsequently identified as Robert Beddia, 53, of Staten Island. Both firefighters were from a fire house — Engine 24, Ladder 5 and Battalion 2 — that lost 11 firefighters on Sept. 11, 2001.

The firefighters, in cardiac arrest, were taken to New York Downtown Hospital, where they were pronounced dead. “Sadly today once again two of New York City’s bravest have made the ultimate sacrifice answering the call of duty,” the mayor said after 9 p.m. at a news conference at the hospital.

Mr. Bloomberg added, “As of now the fire is still not under control. The cause of the fire will be investigated by fire marshals as soon as firefighters have extinguished the remaining pockets of fire.” 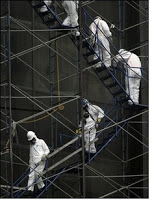 from kurt nimmo: Residents of Manhattan, beware of the flaccid reassurances of mayor Michael Bloomberg. In the wake of a fire in the abandoned Deutsche Bank office building near ground zero, “Mr. Bloomberg sought to reassure residents that the chemicals in the building likely did not present a significant health risk, saying air-quality tests so far showed no danger,” the Herald Sun reports.

Moreover, Bloomberg indicated that the strange X-Files effect we are told went into effect on September 11, 2001—i.e., cave dwelling terrorists were able to defeat the laws of physics—no longer applies. “Officers were preventing nearby residents from returning to their homes, telling them authorities were concerned the former Deutsche Bank office building, vacant since the terrorist attacks six years ago turned it into a toxic nightmare, could fall. Mayor Michael Bloomberg said that fear turned out to be unfounded.”