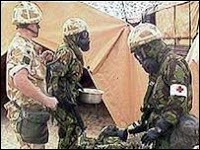 from bbc: There is evidence linking chronic health problems suffered by Gulf War veterans to exposure to pesticides and nerve agents, US research has found. A third of veterans of the 1991 war experienced fatigue, muscle or joint pain, sleeping problems, rashes and breathing troubles, the research found. US Congress-appointed committee on Gulf War illnesses analysed more than 100 studies in the research. It found evidence linking the problems to a particular class of chemicals. These were an anti-nerve gas agent given to troops, pesticides used to control sand-flies, and the nerve-gas sarin that troops may have been exposed to during the demolition of a weapons depot.

from natural news: People of the world, the US Government is planning to poison more than two million people, in California, using an untested biological "pesticide" this summer. The chemical to be sprayed is classified by the EPA as a "pesticide" and the plan is to douse cities with this chemical designed to stick on everything for 90 days or longer. This application is not a one time event, but will continue every 1-3 months for as long as five years. The pesticide to be sprayed is not designed to harm the light brown apple moth's who it is designed for, but merely to confuse its mating habits. While harmless to moths, the pesticide has been documented to harm humans.

from sunday times: If civilisation is wiped out on Earth, salvation may come from space. Plans are being drawn up for a “Doomsday ark” on the moon containing the essentials of life and civilisation, to be activated in the event of earth being devastated by a giant asteroid or nuclear war. Construction of a lunar information bank, discussed at a conference in Strasbourg last month, would provide survivors on Earth with a remote-access toolkit to rebuild the human race.