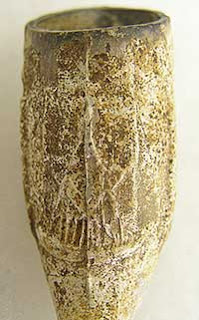 "The George Washington Foundation (GWF) announced, on July 2, 2008, that archaeologists working at the site of George Washington’s childhood home have located and excavated the remains of the long-sought house where Washington was raised... The archaeologists are particularly interested in a broken-off bowl of a pipe, blackened inside from heavy use, that was typical of the mid-18th century when George lived in the house. Found in one of the cellars, the pipe bears a clear Masonic crest; Washington joined the Fredericksburg Lodge of the Masons in 1753..."

US government patents medical pot
from norml: The extent of the federal government’s hypocrisy on the issue of medicinal cannabis truly knows no bounds. Don’t believe me? Just click here.

-US Patent 6630507 - Cannabinoids as antioxidants and neuroprotectants
-Application: filed on 2/02/2001
-US Patent Issued on October 7, 2003
-Assignee: The United States of America, as represented by the Department of Health and Human Services

And there you have it. The same federal government that steadfastly denies pot has any medicinal value also holds the medical patents on the plant’s various therapeutic cannabinoids. And they aren’t the only ones who do.