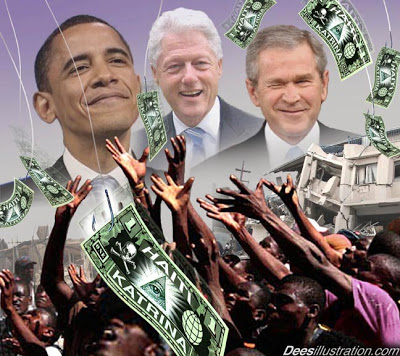 the militarization of emergency aid to haiti:
is it a humanitarian operation or an invasion?
from michel chossudovsky: Haiti has a longstanding history of US military intervention and occupation going back to the beginning of the 20th Century. US interventionism has contributed to the destruction of Haiti's national economy and the impoverishment of its population. The devastating earthquake is presented to World public opinion as the sole cause of the country's predicament. A country has been destroyed, its infrastructure demolished. Its people precipitated into abysmal poverty and despair. Haiti's history, its colonial past have been erased. The US military has come to the rescue of an impoverished Nation. What is its Mandate? Is it a Humanitarian Operation or an Invasion?

The main actors in America's "humanitarian operation" are the Department of Defense, the State Department and the U.S. Agency for International Development (USAID). (See USAID Speeches: On-The-Record Briefing on the Situation in Haiti, 01/13/10). USAID has also been entrusted in channelling food aid to Haiti, which is distributed by the World Food Program. (See USAID Press Release: USAID to Provide Emergency Food Aid for Haiti Earthquake Victims, January 13, 2010)

The military component of the US mission, however, tends to overshadow the civilian functions of rescuing a desperate and impoverished population. The overall humanitarian operation is not being led by civilian governmental agencies such as FEMA or USAID, but by the Pentagon. The dominant decision making role has been entrusted to US Southern Command (SOUTHCOM).

from kurt nimmo: On Sunday, Bill Clinton and George W. Bush mounted the corporate media propaganda platform and complained about the politicization of the Haitian relief effort... The disaster “reminds us of our common humanity. It reminds us of needs that go beyond fleeting disagreements,” said Clinton. Fine words coming from one of the world’s foremost war criminals... If you really want to know what’s going on in Haiti, read John Maxwell’s article, No, Mister! You Cannot Share My Pain! The corporate media sheds crocodile tears over Haiti (between bank and big pharma adverts) and tells us about the country’s immeasurable poverty while providing zero background on why Haiti is a hell-hole of misery and destitution.