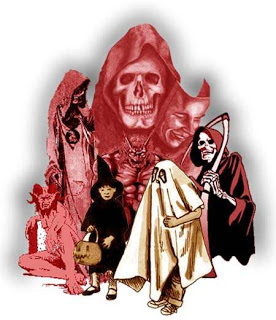 Halloween began over 2,000 years ago among the Celts and their priests, the Druids. Samhain, the Druids most important ritual, signified the death of Summer on November 1. In a blog titled, "Halloween: A Covenant with Death & Hell," Dr Terry Watkins sees mostly evil and informs, "The Druids believed, during Samhain, the mystic veil separating the dead from the living opened. The Druids taught these roaming spirits loosed on Samhain went searching for a body to possess. The frightened Celts would masquerade as demons, evil spirits and ghosts, hoping to convince the roaming evil spirits, they were another evil spirit, and leave them alone. The Celts also prepared meals as 'treats' to appease the evil spirits from 'tricks' or malicious acts; hence our custom of 'trick or treat'."

The Catholic Church later played a role in spreading the custom, "As the Catholic missionaries swarmed Britain and Ireland seeking the mass conversion to Catholicism their orders from Pope Gregory in 601 A.D. was to cunningly convert the Druid rituals into Catholic rituals. The Catholics converted the ritual of Samhain into the festival of All Saint’s Day, a day of celebration and prayer to dead 'Saints.'" Watkins believes Samhain would have died long ago, if it weren't for the blessings of the Catholic Church.

There are dissenting views: "A Heretical History of Halloween" contests much of the history as lacking any factual foundation.  You may enjoy a 45 minute video on You Tube, "Haunted History of Halloween," which provides insight into the date and rituals associated with it.