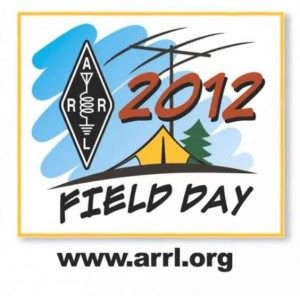 from islandpacket.com: Using slingshots and a crossbow, ham radio operators strung wires through a tree in the parking lot of Beaufort Memorial Hospital on Saturday to fire up a portable radio station and keep it going for 24 hours.

By noon Sunday, members of the Beaufort Radio Amateur Group still were sitting in folding chairs under canopies as the generator hummed and voices from across the world streamed in through the airwaves.

The group, along with 35,000 “hams” across the United States and other countries, was participating in Field Day, an exercise organized by the American Radio Relay League. The idea is to set up temporary stations in unlikely locations and transmit from the field continuously for one entire day and into the next.

Some ham radio operators treat Field Day as a competitive event and try to make as many contacts as possible. But members of the Beaufort radio group see it as a way to keep communication skills sharp if they are needed for an emergency, said vice president David Jennings.

In the immediate aftermath of events such as natural disasters, ham radios often are the only the game in town, Jennings said.

“If you have a Katrina or something, all the infrastructure gets wiped out and initially, all the things you’d normally depend on for police, fire and all the other communications aren’t available,” Jennings said. “One of our advantages is our relative simplicity. A communication tower can get blown down by a hurricane. We’ll drive up, throw a wire up in the tree, start up the generator and we’re on the air, talking to people around the county, around the state, around the country.”

During Field Day, the Lowcountry “hams” chatted with operators as far away as Germany, Puerto Rico and Congo.

They also got to test out new equipment. A trailer painted with the group’s logo bought with a $5,000 grant served as an operating station and carted the generator and other gadgets.

Most of the members who participated did not pull all-nighters, though some were awake — fueled by coffee — for a long time. They worked in shifts so at least one operator would man the station at all times while others went home to take naps, showers and grab a change of clothes.

Wives of the amateur operators organized a covered-dish dinner Saturday night and cooked up eggs, sausage and potatoes for breakfast Sunday morning.

“It becomes a very long day when you get here early in the morning to set everything up and stay all night,” said Jim Gish, a member of the Beaufort radio group. “The idea is to try and be as self-sufficient as we can.”