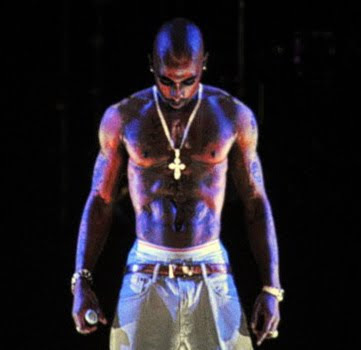 from msnbc: Rapper Tupac Shakur, who was shot to death 16 years ago at the age of 25, was resurrected on stage Sunday for an eerie posthumous performance with former creative collaborator and hip-hop icon, Snoop Dogg. In the closing set of the three-day Coachella Music Festival in Indio, Calif., the life-like image of a shirtless, tattooed Shakur rises from the darkness, gold cross dangling from his neck. Raising his arms into the air, the image of the prolific rapper yells, “What the [expletive] is up, Coachella?!” Shakur's song “Hail Mary” was then played, with the hologram moving as if it were performing, and then Snoop Dogg joined the figure for their duet, “2 of Amerikaz Most Wanted." Then the hologram begins to slowly fade before exploding in a burst of light. Shakur was murdered in Las Vegas in 1996 and his murder remains unsolved. The dramatic imagery proved a haunting highlight of the festival for many, but it was not without controversy. Wrote Rolling Stone reporter Matthew Perpetua, “The hologram basically looks like something out of a very well-rendered video game crossed with the apparition of Obi-Wan Kenobi who appears to Luke Skywalker in “The Empire Strikes Back.” It's very impressive in technical terms, but also very weird and sort of disturbing. The audience seemed to love it, so don't be surprised if this opens up the possibility for further "performances" by dead stars at the festival.” Musician Questlove tweeted, “That Pac Hologram haunted me in my sleep. Rest In Peace 2pac.”