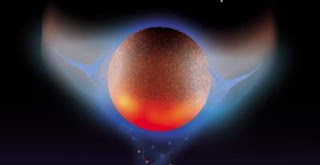 A red or brown dwarf--or perhaps--just a gas giant four times the size of Jupiter may lie beyond the heliosphere in the Oort Cloud at the outer reaches of our solar system.  The mystery sphere remains a story that refuses to die, this week its name is Tyche!  Nancy Atkinson writes dismissively in a Universe Today article, whether the Wide-field Infrared Survey Explorer(WISE) already captured raw data that may determine the existence of a new planet.   Atkinson criticizes The Independent article for suggesting a possible find.  The article seems to simply indulge, however, the enthusiasm of professors John Matese and Daniel Whitmire, who have hypothesized about the existence of Tyche for many years.   Matese and Whitmire believe the mathematics to be irrefutable.  You can read their latest paper, "Persistent evidence for a jovian mass solar companion in the Oort cloud," for the statistical arguments.

The Louisiana at Lafayette astrophysicists dubbed their mystery sphere Tyche, the good sister of goddess Nemesis.  Nemesis was a name suggested to help explain mass extinction events on Earth. You can read about the Nemesis Theory here. You can also view a You Tube video, "Scientists Getting Wise about Nemesis: Invisible Star Shooting Comets at Earth".

Nibiru is the name popularized by Zecharia Sitchin's work: The 12th Planet and refers to the winged or horned disc (pictured).  Planet X is a label used to refer to many unknown bodies and first used in theorizing about the existence of Planets beyond Neptune. Hercolubus or red planet is a name given to the mystery sphere in a book by V M Rabolu.  It seems regardless of the name, you have to ask, "where there's smoke, there's fire"?  There is something dark, lurking at the outer edges of our solar system!