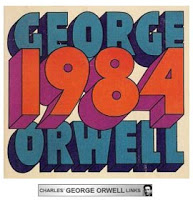 from south coast today: Two students were arrested and another 15 to 20 staged a sit-in at Old Rochester Regional High School Wednesday in a protest that began after students briefly commandeered the intercom system during MCAS testing, school officials and students said. Thomas Buckley... and Zachary Sherman... were charged with disorderly conduct, disturbing the peace and disturbing the school, according to police reports... According to ORR High School Principal Sheila Haskins, one of the students read a passage from something they apparently were studying in an English or history class. Exactly what they read wasn’t clear, but Ms. Haskins said it might have been excerpts from a Fidel Castro speech. That was reflected in police reports. However, some students said it was a passage from George Orwell’s novel, “1984.”