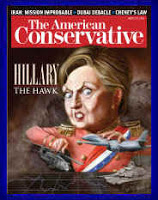 from counterpunch: When Senator Hillary Clinton voted on October 11, 2002, to turn over to President George W. Bush the power that the Constitution vested in her and congressional colleagues to decide whether or not to wage war - or, quoting House Joint Resolution 114, whether an attack on Iraq was "necessary and appropriate" - she appeared to have a conflict of interest:

Her husband, Bill, was of course the former chief of the executive branch. And during her eight years as first lady, Mrs. Clinton never objected to Bill's eight wars, attacks, or interventions: in Afghanistan, Bosnia, Colombia, Haiti, Iraq, Somalia, Sudan, and Yugoslavia. He bombed Iraq in 1993 soon after taking office, again in 1996, and from 1998 till he left office. For a time, he was dropping bombs on Iraqis and Yugoslavs simultaneously in 1999.

None of those acts of war were authorized by Congress.

from monsters & critics: The National Archives is withholding from the public about 2,600 pages of records at President Clinton's direction, despite a public assurance by one of his top aides last month that Mr. Clinton "has not blocked the release of a single document."

Sharon Fawcett, an overseer of the library, said in a recent interview that the records were withheld in accordance with a letter Mr. Clinton wrote in 1994 exercising his right to hold back certain types of files and another letter in 2002 about narrowing the scope of his earlier instructions.

Fawcett confirmed to the Sun Clinton had "total control" of the withholding of the papers.