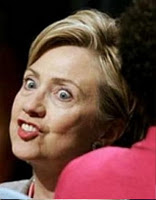 from ny daily news: Fellow democrats blasted Hillary Clinton yesterday for speculating about the political fallout of a potential terrorist attack before the 2008 election, accusing her of exploiting voters’ fears to bolster her campaign.

“Frankly, I find it tasteless to discuss the political implications when talking about a potential terrorist attack on the United States,” Sen. Christopher Dodd of Connecticut, a rival for the Democratic presidential nomination, said in a statement.

Sen. John Edwards, campaigning in New Hampshire, said, “If we’re talking about America being attacked the last thing we should do is be engaged in political calculation.” A presidential candidate should “focus on what’s good for America, not politics, and what needs to be done to keep this country safe,” he said.

During a stop in New Hampshire Thursday, Clinton suggested she was best poised to handle the unexpected, including a terrorist attack.

“It’s a horrible prospect to ask yourself, ‘What if? What if?’ But if certain things happen between now and the election, particularly with respect to terrorism, that will automatically give the Republicans an advantage again, no matter how badly they have mishandled it, no matter how much more dangerous they have made the world,” she said.

“So I think I’m the best of the Democrats to deal with that as well,” she concluded.