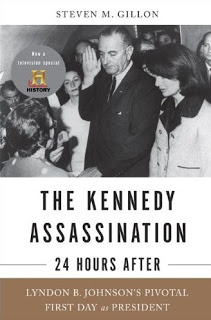 lbj on jfk assassination: "it’s all a conspiracy"

from huffington post: This month will mark the 46th anniversary of the assassination of President John F. Kennedy. A recently declassified oral history by Brigadier General Godfrey McHugh, President Kennedy's military aide on the Dallas trip, sheds new light on the critical hours after the shooting. McHugh makes startling claims about Lyndon Johnson's behavior in the wake of the assassination.

The interview with McHugh, originally conducted for the John F. Kennedy Library in 1978, remained closed for 31 years. It was finally declassified in the spring of 2009. I just happened to be working at the Kennedy Library on the day the interview was opened to the public and have used it for the first time in my new book, The Kennedy Assassination: 24 Hours After...

McHugh, like most members of the Kennedy entourage, did not know that Johnson was onboard. They believed that the new president was on his own plane flying back to Washington. If LBJ was on the plane, McHugh wanted to see for himself. Since he had not seen Johnson in the aisle -- and at 6'4" Johnson would be tough to miss -- McHugh assumed that he must then be in the bedroom. When he checked there Johnson was nowhere to be seen. The only place on the plane he had not inspected was the bathroom in the presidential bedroom.

What McHugh claimed to have witnessed next was shocking. "I walked in the toilet, in the powder room, and there he was hiding, with the curtain closed," McHugh recalled. He claimed that LBJ was crying, "They're going to get us all. It's a plot. It's a plot. It's going to get us all.'" According to the General, Johnson "was hysterical, sitting down on the john there alone in this thing."

'puzzlers' reassemble shredded stasi files, bit by bit
from latimes: East German documents provide a crucial piece of history, supporters of the project say, but putting them back together could take hundreds of years. A computerized system would help, but it's costly.

11/5 update:
dartmouth scientist says oswald rifle photo real
from huffpo: The backyard photo of Lee Harvey Oswald holding a rifle and Marxist newspaper was called a fake by Oswald when he was interrogated by Dallas police after his arrest. The image had fueled conspiracy theorists who said the image must have been faked because of the unusual shadows. Now, Dartmouth Professor Hany Farid, a computer scientist and authority on forensic imaging, has determined definitively that the image is, indeed, real. In this YouTube video, he demonstrates how three dimensional modeling was used in reaching his conclusion. Professor Farid's finding will be published in the peer-reviewed academic journal "Perception". Here is the AP report.