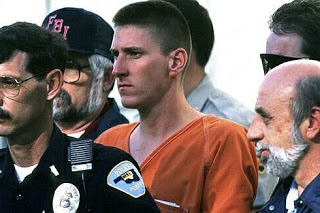 from paul joseph watson: Bill Clinton, the Southern Poverty Law Center and almost the entire corporate media are not letting a good opportunity go to waste today – by dancing on the graves of 168 victims & exploiting the 15th anniversary of the false flag Oklahoma City Bombing to demonize their political enemies, the Internet & anyone who dares to express dissent against the federal government.

The propaganda putsch coincides with FBI head Robert Mueller stating that right-wing extremist groups and anti-government militias now represent as big a terror threat as Al-Qaeda, as the whole apparatus of the war on terror is shifted to target Americans increasingly angry at the egregious corruption in government and the global economy as their standard of living plummets and their pension funds are under threat of seizure.

It also dovetails President Obama’s hyping last week of the threat posed by individuals acquiring nuclear weapons, a claim top nuclear experts like Henry Sokolski have derided as overstated and not based on any new intelligence.

Obama’s warning arrives shortly after FEMA was forced to scale back a simulated nuclear bomb attack by terrorists in Las Vegas that was set to involve 10,000 emergency responders, U.S. troops and officials in role playing exercises.

Former President Bill Clinton told CNN’s Wolf Blitzer on Friday that he is worried rising anger at the federal government could lead to another OKC bombing, implying that people who use the Internet to express dissent will be to blame for the violence.