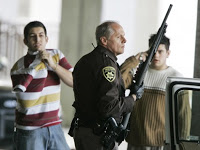 from truthnews: It was a coincidence, no doubt. Not only did Bush visit Omaha prior to the massacre, but so did the Ministry of Homeland Security.

“We learned today that shortly before the shooting a Homeland Security employee visited the West Roads Mall to talk with officials about the mall’s security,” reports Charles Gibson for ABC News (see video). “Airports and sports arenas have tightened security considerably since 9/11, but malls have been reluctant to do so.” …

For some odd reason, a Google News search does not return a repeat of the ABC News admission that a Ministry employee was at the mall the same day as the massacre.

However, comrade Chertoff, in remarks after the event, admitted that the Ministry had an employee at the West Roads Mall prior to the incident, although the corporate media did not find this worthy of mention.

“We also have our protective security advisors who go and visit various facilities. We actually had one, by coincidence, at the mall in question at the time of the incident, discussing reaction to IEDs and what you can do to prevent or reduce your vulnerability to IEDs. We had, again, given over $45,000 to this particular mall as part of a Buffer Zone Protection Plan, which resulted in allowing them to build entrance bollards, portable barriers, and communication systems.”

In other words, the Ministry sent a message in spades: malls, not unlike airports, are to become Gestapo zones. Prior to the shooting, the FBI prepared the ground by issuing a spurious warning about al-Qaeda, the documented CIA intelligence asset, striking malls in Los Angeles and Chicago.

from grand theft country: This is a segment from ABC World News, where Charles Gibson reveals that President Bush “coincidentally had been in Omaha just hours before the shooting began.” We are also made aware that an agent with the Department of Homeland Security visited the exact same mall “shortly before” the massacre took place. He was reportedly there to speak with officials about the mall’s security.