For years, Zicam Cold Remedy, has been sold as a drug for colds but has never been tested by federal regulators because of its homeopathic nature. Zicam, manufactured by Matrixx, is a gel taken through intranasal administration and advertised as shortening the duration and severity of colds. Its main ingredient, zinc gluconate, has been associated with the loss of sense of smell. 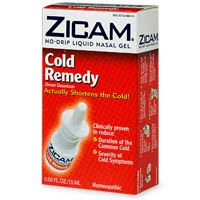 from reuters: Matrixx must seek FDA-approval if it wants to continue selling Zicam zinc products administered via the nose. William Hemelt [acting president, chief financial and chief operating officer] said the company was not likely to do so, saying the process would take years and be "highly expensive."