how eggs are made in the US 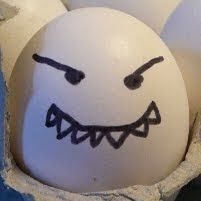 from allgov: Chickens living on factory farms endure suffering described as “staggering,” according to an undercover investigation carried out by The Humane Society of the United States (HSUS). An HSUS investigator spent two months working inside four different factory farms, owned by two of the nation’s largest egg producers, Rose Acre Farms and Rembrandt Enterprises, and witnessed industry practices “that are simply rotten.”

Among the cruelties found were birds with broken bones from rough handling or prolapsed uteruses (or “blow-outs”). Other conditions included chickens being trampled in cramped cages, unable to reach food or water and slowly dying, or manure pits left unattended for up to two years, causing blindness for birds as a result of excessive ammonia levels.

HSUS also examined conditions at cage-free farms, where life is better for chickens but not necessarily cruelty-free. Birds are able to walk, spread their wings and lay eggs in nests. But cage-free farms buy their hens from the same hatcheries that supply battery-cage farms—hatcheries that kill more than 200 million male chicks each year. Cage-free hens also have part of their beaks burned off, and they are slaughtered at less than two years old.