how great thou, bart 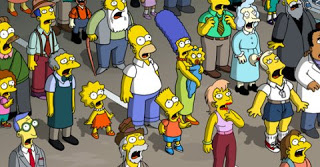 from jim amrhein: I was afraid that, in the movie version of The Simpsons, these elements would be diluted or tempered in pursuit of the wide-reaching mega-appeal summer blockbusters strive for. I needn’t have worried. This dissenting spirit is not only alive and well on the big screen, but applied with such alternately brutish and near-subliminal expertise that, in my humble opinion, The Simpsons Movie sets a new American cinematic benchmark (not to mention sounds a new wake-up call) for the criticism of government, Big Business and the major media in this country…

But especially the government.

In fact, the entire premise of the movie casts government as the antagonist. Basically, the plotline is that after the town lake becomes hopelessly contaminated with all sorts of pollutants (Homer himself administering the toxic coup de grâce), the Environmental Protection Agency seizes control of Springfield. In short order, the entire town is wiped off maps and GPS grids by the government, then sealed under an impregnable glass dome and left to implode into an anarchic, might-makes-right state that’s like something out of Lord of the Flies or Hobbes’ Leviathan…

Of course, The Simpsons Movie is farfetched and nonsensical. But it’s also brilliantly crystalline in its illustration of the very essence of government – how it does exactly the wrong things, for the wrong reasons (like their own enrichment and expansion), while selling it to the public under the auspices of acting in their interests.

It’s simultaneously stupid slapstick camp and quasi-polemical high art. And it’s hilariously funny, especially if you’re alert… Among the funniest highlights in The Simpsons Movie that poke a hot stick in the eye of government are:

* When EPA Chief Cargill – a business wizard who was appointed to bring his PR savvy to the largely invisible agency – presents President Schwarzenegger with dossiers outlining five options for dealing with the environmental crisis in Springfield, he chooses one at random, offering the heavily-accented justification “I was elected to lead, not to read.”

* Later in the movie, the same scenario plays out in the Oval Office after the containment dome plan begins to show weaknesses that could backfire, hurting the EPA’s image. Villain Cargill again presents the President with five options – but hints and prods and coaches him until he picks Option 4, which calls for the nuclear annihilation of Springfield. At other points in the film, we discover that Cargill’s conglomerate had a hand in making not only the bomb, but also the dome that originally sealed off the town…

* In an attempt to win public support for the creation of a “new Grand Canyon” where Springfield used to be, the Feds enlist the aid of über-popular Tom Hanks to appear in a public service announcement, in which he says: “Hello, I’m Tom Hanks. The U.S. Government has lost its credibility, so it’s borrowing some of mine…” And later, “Because if you have to trust a government, why not this one?”

* When Cargill calls in the troops to protect Springfield from Homer’s attempt to rescue both his family (whom the EPA has taken prisoner) and the town, one of his minions calls him on the carpet – accusing the bureaucrat of having let power go to his head. Cargill answers: “Of course I’ve gone mad with power! Have you ever tried going mad without power? It’s boring and no one listens to you!”

* Having fled Springfield as wanted fugitives, the Simpson family takes refuge in Alaska… While on a train across the tundra, they talk openly, Marge assuring the kids that they’re far from the prying eyes and ears of government. Just then, the conductor – who’s actually a surveillance robot – picks up and starts transmitting their conversation to a vast installation of the NSA, where hundreds of Federal agents are eavesdropping on thousands of conversations across the nation. The pointy-headed geek who hears them jumps up and gleefully screams to the whole cavernous room: “The government finally found someone we were looking for!”

These are just a few from many of the comedic barbs The Simpsons Movie hurls at our government. And it would take multiple essays to catalog even the most obvious shots the film takes at the media, popular culture and big business. If you see the film (and you should), keep an eye out for Bart’s almost under-the-radar swipe at Disney. It’s priceless!