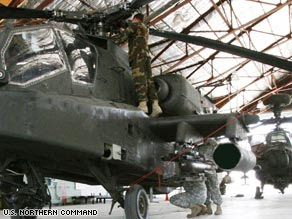 army combat unit to deploy within US

from cnn: The United States military's Northern Command, formed in the wake of the September 11 terrorist attacks, is dedicating a combat infantry team to deal with catastrophes in the U.S., including terrorist attacks and natural disasters. The 1st Brigade Combat Team of the 3rd Infantry, which was first into Baghdad, Iraq, in 2003, started its controversial assignment Wednesday. The First Raiders will spend 2009 as the first active-duty military unit attached to the U.S. Northern Command since it was created. They will be based in Fort Stewart, Georgia, and focus primarily on logistics and support for local police and rescue personnel, the Army says.

army deploys its most blooded combat unit inside US

'americans are facing a coup as of this morning. it's happened.'
from talkingsticktv: Interview with Naomi Wolf author of "Give Me Liberty: A Handbook for American Revolutionaries" given October 4, 2008 on Mind Over Matters, KEXP 90.3 FM Seattle.

naomi wolf: 1000s of troops are deployed on US streets ready to carry out 'crowd control'

secret bush admin plan to suspend US constitution
from tom burghardt: Ten months before the September 11, 2001 terrorist attacks, Secretary of Defense Donald Rumsfeld approved an updated version of the U.S. Army's secret operational Continuity of Government (COG) plans. A draft document (163kb PDF) published by the whistleblowing website Wikileaks entitled, "Army Regulation 500-3, Emergency Employment of Army and Other Resources. Army Continuity of Operations (COOP) Program," dated 19 January 2001, spells out changes in Army doctrine. Issued by Headquarters, Department of the Army and signed off by Secretary of Defense Donald Rumsfeld and the Secretary of the Army, the document is affixed with a warning: "Destruction Notice: Destroy by any method that will prevent disclosure of contents or reconstruction of the document."

US army to serve as US police?
from chuck baldwin: To understand my concern for this new "homeland Army brigade," it is important that we rehearse the principles of liberty as they relate to standing armies. One of America's most sacred principles has always been that the U.S. military was never to be used for domestic law enforcement. The fear of standing armies ran very deep in the hearts and minds of America's founders. The tyranny and misery inflicted upon the colonies by British troops weighed heavily upon those who drafted our Constitution and Bill of Rights. In their minds, the American people would never again be subjected to the heavy weight of army boots. Furthermore, they insisted that America would have a civilian - not military - government. And after the fiasco of the abuse of federal troops in the South following the War Between the States, the doctrine of Posse Comitatus was enacted into law... But in 2006, President George W. Bush pushed a Republican-controlled Congress to pass the John Warner National Defense Authorization Act for Fiscal Year 2007, which included a section titled "Use of the Armed Forces in major public emergencies." This section provided that "The President may employ the armed forces to restore public order in any State of the United States the President determines...." In effect, this bill obliterated Posse Comitatus. 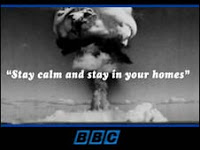 from bbc: A script written by the BBC and the government to be broadcast in the event of a nuclear attack has been published. The script (16kb PDF), written in the 1970s and released by the National Archives, included instructions to "stay calm and stay in your own homes". It said communications had been disrupted, and the number of casualties and extent of damage were not known. Other papers reveal debates about how to ensure the person reading the script was authoritative and comforting. The script was discussed from 1973 to 1975, during the Cold War.